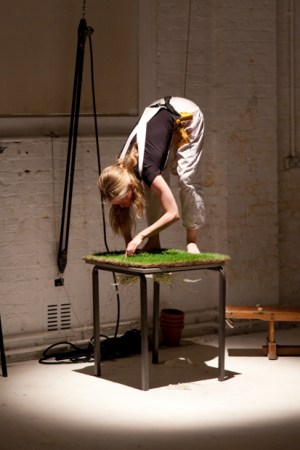 Signhild (born 1985, Norway) has a Master of Arts in Performance Making from Goldsmiths University of London but her background in contemporary dance is what makes the base for most her work. She works as a performer and performance maker. Dancer and choreographer. Teacher and producer. Based in Drammen.

Her productions spans from children’s performances to live art and installations. The core of her exploration lays in the communication between the space and the performance and between the performers and the spectators. This clearly shows in her work, which are often either site specific or interactive.

Some examples of her previous works are

Do touch the artwork (2014) – an urban playground of beans.
Til overs (2014) – an interactive promenade performance for children.
Unearth (2013)– a site-specific exploration through Oslo and Belfast.
Melodien som forsvant (2011) – a magic musical fairytale for children.
Innenfor bortenfor (2009) – a jour­ney deep inside a moun­tain.

Signhild is half of the performance duo Rohn/Waersted together with Austrian artist Hanna Rohn.

When work­ing out­side of tra­di­tional per­for­mance spaces, I find new pos­si­bil­i­ties to include sto­ries and emo­tions, archi­tec­ture and tex­ture that already exist at the site, into my work. I find that by including senses such as smell and touch into the per­for­mance experience it is easier to create a more immersive epxerience for the audience that touches them on a different level than a traditional frontal performance.