A human sculpture moves in a cling film skin and finally breaks out. Plastic surgeries are planned and explained. Ropes bind and support. All of the reasons why countries have borders. And: What are actually the criteria for good looking genitals?

Especially female bodies have often been made battlefields for both domestic, political and cultural conflicts – armed or unarmed – in history as well as today. Mothers having to bear children that could be sent to war by the nation, rape as a key military strategy in conflicts all over the world, female bodies being cut in the name of culture, beauty, religion or fashion.

With a little gallows humour every now and then in their live art performance Collateral Damage Austrian-Norwegian artist duo ROHN/WÆRSTED make provocative links between nation and beauty, war and motherhood, plastic surgery and identity.

Collateral Damage works at the friction between dance, theatre, visual art, documentary material as well as current gender research. Quotes from scientific articles as well as from other found text build the corpus for original compositions and soundcollages by young composers Charlotte Piene and Steinar Yggeseth that accompany the performance.

How is a body a territory, where are its borders, how can it be mapped?
Where does body improvement end, when does mutilation start?
Provocatively asked: What is the difference
between female circumcision and genital aesthetic surgery? 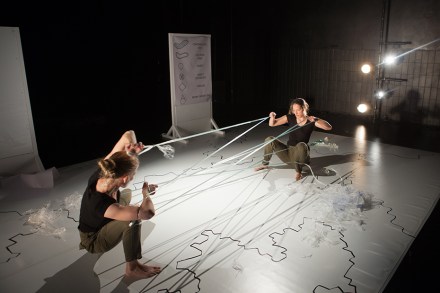